The first telescope in the Catalina Mountains was built in 1962 for polarimetry and photometry at the site of the current 0.7-m Schmidt telescope adjacent to Mt Bigelow.  The telescope that would become the Catalina Sky Survey 1.5-m was built at the direction of University of Arizona planetary scientist Gerard Kuiper in 1967. At the time, it was slewed by hand.  IBM punch cards and star charts were used to locate targets, and data was recorded on paper tape.  The 1.0-m telescope was built in 1968 to test if a center-supported glass mirror would produce quality images.

In 1970 the U. S. Air Force closed their radar station at the summit of Mt. Lemmon and Kuiper petitioned the U. S. Forest Service to take over the site for a new observatory. This would become the future home of the 1.5-m and 1.0-m Catalina Sky Survey telescopes which were moved there in 1971. 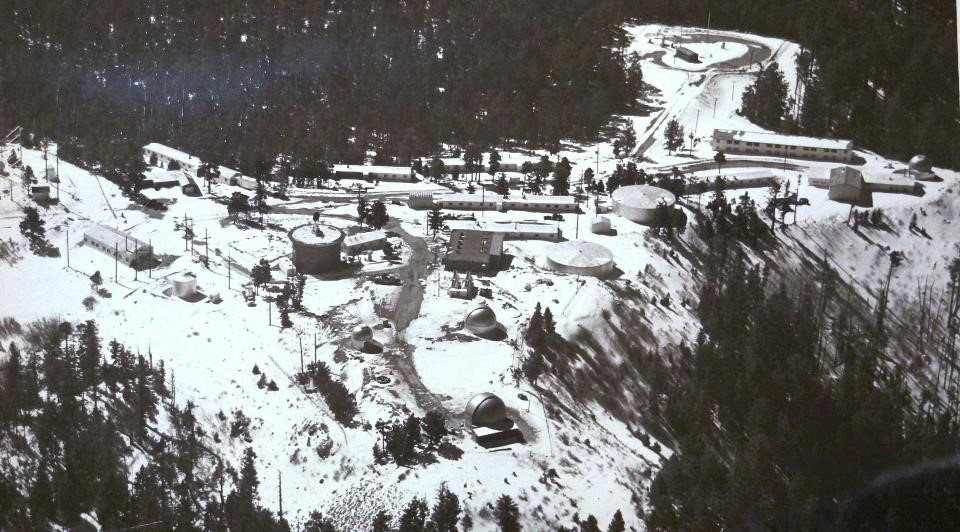 Mt Lemmon Station in 1971. What is now the CSS 1.5m telescope is located at bottom center.

In 1998 Steve Larson and two astronomy undergraduate students Tim Spahr and Carl Hergenrother founded the Catalina Sky Survey. The team obtained exclusive use of the unused 0.7-m Schmidt telescope on Mt Bigelow, and began a photographic survey of high ecliptic latitudes as the “Bigelow Sky Survey”. The survey expanded in 1999 with the development of specialized hardware and software dedicated to the search for NEOs. Additional grants from NASA allowed the founding of the Siding Spring Survey in New South Wales, Australia to cover the southern hemisphere, making it the only full-time NEO survey in the southern hemisphere.

Start of CSS, (formerly the Bigelow Sky Survey). At Left: the founders, Steve Larson, Carl Hergenrother, Tim Sparh, and John Brownlee. Note too the auto guider controls at the bottom of the 8” guide scope where the Periodic Error Correction was trained. Center: the 16"/27" Schmidt (w/16" corrector plate). Note the cone-shaped top supporting the 16” Schmidt corrector; and the relative lack of cables going to the camera because it was thermoelectrically cooled (yellow tube for chilled water). The CCD was a single channel, thick 4K x 4K. Right: Tim Spahr operating in the then refurbished warm room.

After numerous upgrades, the Catalina Sky Survey became the most productive NEO survey in 2004, and to date has found more NEO’s than any other survey in the world.