Move over Mars, you’re not the only solar system planet with two moons. It now appears that the Earth for several months, and perhaps up to three years, has gravitationally captured a tiny asteroid, rendering it a second moon, albeit temporary. This new ‘mini moon’, designated 2020 CD3, is estimated to be 2 to 3.5 meters across (6 – 12 feet), and it will likely be flung away from the grip of Earth’s gravity sometime in April of this year.

This fascinating new mini-moon was discovered by Catalina Sky Survey (CSS) astronomers Teddy Pruyne and Kacper Wierzchos during the night of February 15, 2020.  2020 CD3 first appeared to Pruyne and Wierzchos as a sequence of four short streaks tracking across images acquired at the CSS’s 60-inch telescope atop Mt Lemmon north of Tucson. Pruyne and Wierzchos routinely submitted their discovery positions for the new near-Earth object (NEO) candidate to the Minor Planet Center (MPC) at the Smithsonian Astrophysical Observatory, the world’s clearinghouse for all new and archived asteroid data. The new object’s positions and motion were immediately shared with the NEO observing community to enable further observations. Additional data from CSS’s follow-up telescope atop Mt Lemmon, Arizona, plus observations from the Spacewatch and Bok telescopes atop Kitt Peak, Arizona; and from observatories in England, Spain, Hawaii and Croatia soon indicated that the object was most likely captured by Earth’s gravity as was now a temporary satellite or moon of our planet.

Catalina Sky Survey's discovery images of 2020 CD3 as seen in four 30-second exposures. Note that the object appears streaked, indicating its relatively close position in near-Earth space. Also apparent is the curve of the object's trajectory from the first to the fourth images, this as Earth's gravity influences the object's orbital path (Credit: Catalina Sky Survey, University of Arizona)

Captured objects with complex orbits such as 2020 CD3 represent very rare discoveries and great care must be taken in analyzing and interpreting the orbital data and spectra as their orbits can be similar to re-captured space junk, for example temporarily lost rocket boosters adrift in near-Earth space.  However, additional analysis of 2020 CD3’s orbital motion revealed a key feature, namely that it appeared to be little affected by the force of solar radiation pressure, indicating the object was likely relatively heavy for its size. This characterization greatly increases the probability that it is a natural, dense object like a small rocky asteroid, rather than a less dense piece of space junk.

Despite its tiny stature, 2020 CD3 was discovered at a distance of about 300,000 km (186,000 miles), which is closer to earth than is our own ‘mega moon’. Equally intriguing is that orbital dynamicists, the researchers who conduct detailed analyses of planetary motions, believe that our new companion moon was first captured by Earth’s gravity many months ago, and perhaps as many as three years ago. Despite being so close to Earth, the object went undetected largely due to its tiny size, in addition to the complex circuitous orbital pathway it has followed. 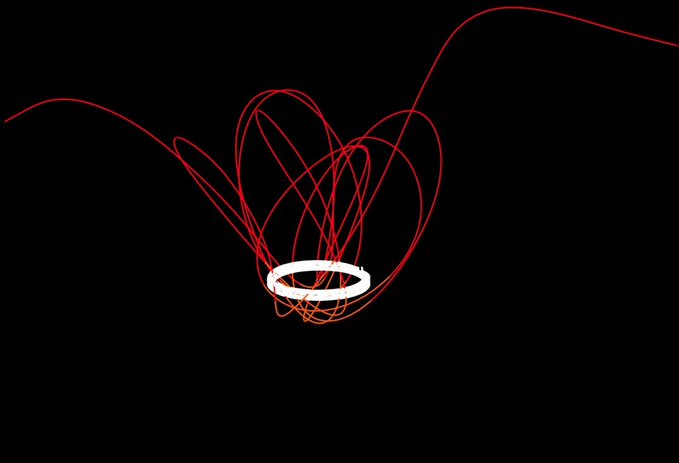 Above  diagram showing the complex orbital path of 2020 CD3 (red/orange line), representing it's capture by Earth's gravity and eventual ejection from the the Earth-moon system. The white band is our moon's orbit; Earth (not shown) would be at center of the band. (Credit: GravitySimulator - Tony Dunn)

Importantly, it was also confirmed that the object does not pose an impact threat to Earth, at least not during this encounter, although analysis from the Jet Propulsion Laboratory’s Sentry project indicate about 3% probability of a 2020 CD3 impact within the next 100 years. Further observations will refine the predictions and may eliminate the 100-year impact threat altogether. For now, 2020 CD3 is gently receding from Earth, and by next month it will be free of our Earth-moon system and once again fall under the influence of the sun’s gravity. However, in the future it may re-encounter the Earth and again become temporarily captured and ejected, or perhaps impact the planet.  Not to worry however, there should be little concern if it does impact: objects the size of 2020 CD3 impact Earth about once every few months, and typically disintegrate harmlessly in the upper atmosphere, occasionally dropping small fragments of meteorites to the surface.

Interestingly, this is not the first temporarily captured mini-moon for Earth. In 2006, Catalina Sky Survey astronomer Eric Christensen discovered the object 2006 RH120 which was also determined to have been captured within Earth’s gravity well, and like 2020 CD3 was eventually ejected away from the Earth. The Catalina Sky Survey’s discoveries of both 2006 RH120 and 2020 CD3 represent the first ever opportunity to directly observe members of this rare population of near-Earth asteroids during their temporary capture phase. Further study of these two known temporary mini-moons, and from the yet-to-be-discovered moons, will assist planetary scientists in evaluating the population of these objects, how their complex orbits evolve, and what opportunities they pose for exploration. After all, they conveniently come very close to us and represent attractive research targets for ground-based remote observations, possible sample return missions, as well as in-situ resource extraction missions. Although 2020 CD3 is too tiny and dim to see with the naked eye, and even from most backyard telescopes, for now we can enjoy the thought that for at least a few weeks we’re all living under the silvery gaze of not one, but two wonderful moons.

Once Again the Catalina Sky Survey Discovers an Earth-Impacting Asteroid