Sometime midyear in 2002, a short 18 years ago, there were less than 1500 total known near-Earth asteroids. However, modern methods of asteroid detection and tracking were just beginning to reach new levels of efficiency and capability. Fast-forward to today, when in calendar year 2020 the NASA-funded Catalina Sky Survey (CSS) discovered a total of 1546 new Near-Earth Objects (NEOs): more new NEOs in a single year than that found in all history prior to 2002!

Indeed, CSS’s 1546 NEOs for 2020 has set a new high-water mark for total number of NEO discoveries, within a calendar year by a single survey program. This occurred within a record year for the broader NEO survey community that collectively discovered 2955 NEOs. The NASA-funded Catalina Sky Survey has been a pioneer and leader in NEO surveying and discovery for two decades, and some notably more frequent periods of clear and stable sky conditions in southern Arizona in 2020, coupled with recent modifications to software and survey strategies have pushed discoveries to these all-time records. Equally remarkable is that this productivity occurred within a year that saw a brief shutdown of the program for the COVID19 pandemic, and a longer shutdown as the Bighorn wildfire raged across the Santa Catalina Mountains, home to the Catalina Sky Survey telescopes. If not for the heroic efforts of more than 1400 firefighting personnel, the CSS facilities might not be standing today. 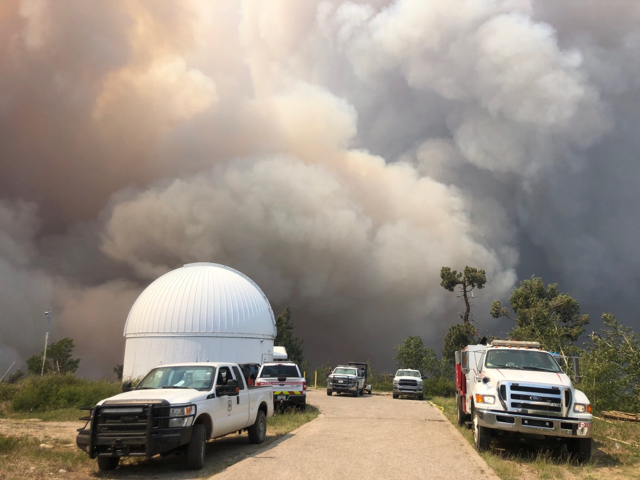 Near-Earth objects are mostly asteroids, and a few comets whose orbits bring them into Earth’s neighborhood. Fortunately, among the roughly 25,000 NEOs that are currently known, none pose a significant impact threat to Earth. However, over very long time spans, gravitational influences and other forces can potentially nudge some of these objects ever-closer to Earth’s orbit, and possibly onto a collision course. Additionally, there are many un-discovered NEOs of all sizes, hence the necessity for fulltime monitoring surveys such as the Catalina Sky Survey.

The graph above shows the trajectory of Catalina Sky Survey NEO discoveries since the late 1990s (green bars). The rapid increase rate of discovery is attributed to the projects wide-field survey telescopes integrated with state-of-the-art electro-optical cameras and detection software, and maintaining a fulltime team of professional real-time observers.

Included within the 1546 new CSS-discovered NEOs from 2021 are 192 asteroids larger than 140-meters (~450 feet) across, a size threshold of interest to NASA considering the potential damage a space rock of this size could inflict if it impacted. Also included in CSS’s haul of NEOs are 42 Potentially Hazardous Asteroids (PHAs) which are larger than 140-meters across and whose orbit can bring them within 20 times the Earth-Moon distance; a close call, cosmically speaking, and necessitating our continued monitoring. In addition, a handful of other CSS-discovered space rocks in 2020 deserve special mention and are compiled here as the Catalina Sky Surveys ‘2020 Best of Class’:

SMALLEST: ‘2020 CW’ likely measures about a mere 1-meter across (~3 feet), and so asteroid ‘2020 CW’ would easily fit atop most people’s kitchen tables (albeit a super-sturdy table)! Also discovered are 41 additional asteroids less than 6-meters (~20 feet) across.

CLOSEST: ‘2020 JJ’ is a 4-meter wide (13 feet) near-Earth asteroid that grazed by Earth at a distance of only 11,600 kilometers (about 7,200 miles) above the surface on May 4, 2020; this distance is well within the ring of man-made geosynchronous satellites that orbit our planet.  CSS also discovered 54 additional asteroids which passed between the Earth and moon, including 4 asteroids passing less than 1/10th the Earth-Moon distance.

FARTHEST: ‘2020 BS7’, although discovered as it passed through the innermost solar system, ‘2020 BS7’ is outward bound again, en route to its aphelion, its furthest distance from the sun is out at 868 million kilometers (540 million miles) where it can call Jupiter its neighbor.

TOUGHEST: ‘2020 DD’ is a NEO roughly 70-meters (230 feet) wide whose orbit traverses to the cold reaches of the outer asteroid belt, but also brings it ‘scorchingly’ close to the sun on its inbound leg. Passing only about 17 million kilometers (11 million miles) from the sun, near-Earth asteroid ‘2020 DD’ passes almost 1/3 closer the sun than the planet Mercury. Temperatures on the sunward side of Mercury can reach a roiling 800F. It is likely that daytime highs on ‘2020 DD’ are hotter still! Also discovered were an additional 13 sun-baked near-Earth asteroids whose orbits bring them closer to the sun than Mercury’s closest approach.

MOST EXTRAORDINARY:  Perhaps the most exciting discovery of 2020 was that of ‘2020 CD3’ which was determined to be a temporarily captured second moon of the earth (aka ‘the Minimoon’). Discovered by Catalina Sky Survey astronomers Teddy Pruyne and Kacper Wierzchos on the night of February 15, 2020, ‘2020 CD3’ is estimated to be 2 to 3.5 meters across (6 – 12 feet), and it was flung away from the grip of Earth’s gravity sometime in April of 2020.

Catalina Sky Survey's discovery images of 2020 CD3 as seen in four 30-second exposures. Note that the object appears streaked, indicating its relatively close position in near-Earth space. Also apparent is the curve of the object's trajectory from the first to the fourth images, this as Earth's gravity influences the object's orbital path (Credit: Catalina Sky Survey, University of Arizona)

Discoveries of such objects are incredibly rare, and although it was cast away from Earth’s neighborhood, and never posed an impact threat, it may someday re-encounter the Earth and again become temporarily captured and ejected, or perhaps impact the planet.  There should be little concern if it does impact: objects the size of ‘2020 CD3’ impact Earth several times per year and typically disintegrate harmlessly in the upper atmosphere, occasionally dropping small fragments of meteorites to the surface.